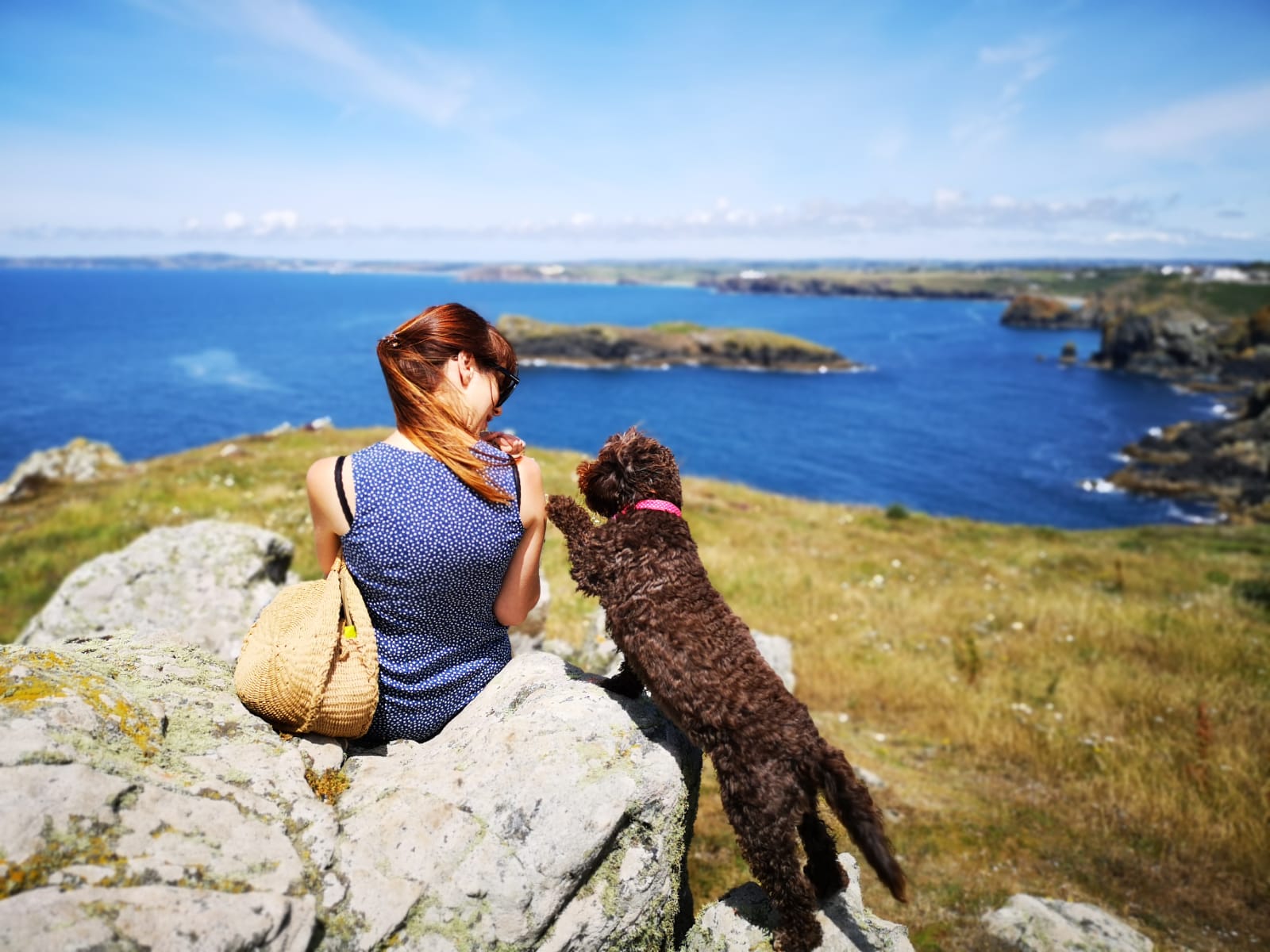 My top walking spots on the South Cornish coast

Natalie continues to share her favourite Cornish coastal walks with us; and this time she and her gorgeous Partridge are in the south…

The serene south coast offers some of the most breathtaking views – with inimitable coastal hues and patterns of the landscape; Cornwall’s answer to the Caribbean, providing an abundance of dog friendly beaches, sandy coves and sculptural rock-faces; a plethora of sky-meets-sea, waiting for you and your canine pal to discover.

I love Mullion Cove throughout the seasons, but during the summer months, the colours of the sea, set against the serpentine rock are something else – so epically vivid, it really is a dreamy spot, not to mention, every dog’s dream location.

Take the Coastal Path up from the historic harbour, and walk along the impressive cliff tops of the Lizard Peninsula, overlooking the Atlantic Ocean.

Head west on the Coastal Path to Poldhu Beach Café in under an hour, a great stop-off for refreshments, with a further 30-minutes taking you to Gunwalloe Beach. At Gunwalloe, seek out the Halzephron Inn – awarded Cornwall’s most dog friendly pub 2019 – for generous plates of seasonal fare, stunning views, or a warming open-fire, depending on the season.

A more strenuous two-hour trek south, will take you to the Lizard – the most southerly point of the UK – and the picturesque Kynance Cove.

Talland Bay is one of those destinations that beckons your return; a small and serene bay, nestled midway between Looe and Polperro, it is in principle made up of two beaches – one sand and one shingle, with access to the South West Coastal Path. An all-year-round dog friendly beach, Talland Bay provides an enviable position to explore the South Cornish coast.

With its many rock pools to discover, and a sandy beach that is great for swimming, it offers one of the most picturesque dog-friendly beaches in the area. Talland Bay beach is just one of a number of the South Coast’s welcoming coves where you can walk (or swim) with your dog throughout the year. Other great spots for salty sea dogs are Gorran Haven, Hannafore (West Looe), Porthcurnick and Lantic Bay.

Partridge and I love to walk the Coastal Path, 45-minutes to the charming fishing village of Polperro, taking in the breathtaking cliff top views along the way, before stopping at the Three Pilchards for a bite to eat by the log burner– the Sunday roast is sure to hit the spot after the steep trek.

If you fancy taking in a little culture on your travels, dogs are welcome at the Polperro Heritage Museum of Smuggling and Fishing or for your seafaring hounds, why not get out on the water with Fowey River Hire.

Natalie Millar-Partridge is a Freelance Writer, Destination Expert and Hotel Reviewer for Telegraph Travel, as well as Co-founder of the online platform for dog friendly escapes – Canine Cornwall.

She also runs her own travel and lifestyle blog, showcasing her diverse talents as a writer in editorial, digital media, photography and creative content.

With fifteen-years in the industry, Natalie has written for some of the most influential regional, national and global publications; yet having travelled extensively, she still ranks Cornwall and the South West as ‘one of her top-ten dreamiest escapes’.

Read more about Natalie’s travels on her blog >>

We use cookies to ensure that we give you the best experience on our website. If you continue to use this site we will assume that you are happy with it.Ok